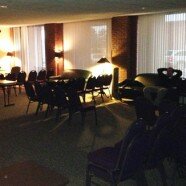 As I mentioned in my introduction, I started roleplaying via Jeff Hannes’s Dramatic Roleplaying Tournament, which he runs every year at Running GaGG.

A DRT module is different than your typical con game. The characters are always pre-made, but there aren’t any numbers on the sheets. Instead it details your character’s history, personality, their views on the other characters, and what’s been happening recently.

The DRT has always been held in the Hunt Room, which will be laid out to reflect the space you can use in the module—different rooms, nooks and crannies, etc. The tournament consists of multiple qualifying modules on Friday and Saturday, and a final round on Sunday. 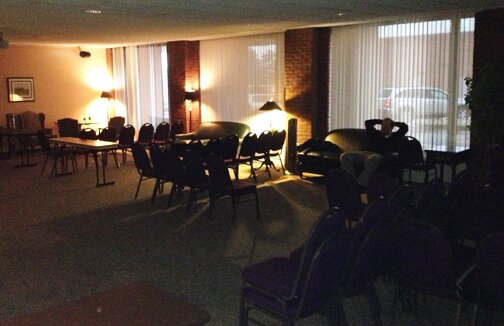 Part of the Hunt Room set up for a DRT Module.

After playing a song that reflects the theme of the module, Jeff will explain the starting situation and stand back, letting the module spin out of control the players take control. Occasionally he’ll jump in with a plot event, or as an NPC, or with a whisper in your ear of something your character may suddenly realize, but for the most part you’re on your own.

And that’s when the fun begins.

This year we had:

This is pretty typical fare for the Dramatic Roleplaying Tournament.

Before the module got into gear, all the Brother Pauls sat around a table and quickly discussed what we would do while playing members of this wacky, “Master”-worshipping cult. The conversation went thusly:

Me: “I think whenever anyone says ‘Master’ we should all say ‘Praise the Master!’ right afterwards.”

Sue: “We should do some sort of gesture with it!”

Me: “How about we cross our arms and bow our heads?”

Me: “We should all do it like that—like we’re welcoming the Master with a hug!”

Thus, “Praise the Master!” was born.

Here’s a little module story I like to call “Revenge is a dish best served cold, Greg.” My friend, Greg, was playing Fake Paul. Fake Paul pretended he could hear the Master all the time. He actually couldn’t—he didn’t even believe in the Master!—and he knew if we ever found out he was a fraud we’d cook him. However, none of that stopped him from pranking all the other cultists with phony orders from the Master. Mid-module he walked up to me and said, “The Master would like it if you would speak to our guests only in questions—very loud questions.”

If you’ve never had to speak only in questions, try it. Get into a conversation with someone. See how long it is before you realize how badly speaking only in questions cripples your interactions with your fellow human beings. Then, try shouting your questions at people. See how they react.  Remember that I was playing the HOST and was shouting questions at all my guests.

Yeah, I’m SO getting him back for that one.

Oh, in case you were wondering, in the end we only ate one of the non-cultists. The other two converted.

No, seriously, rack on the wall, bed in the middle, chair with awkward attachments, whips, chains, the whole nine yards. There was also a mysterious locked box, which one of the PCs opened, hoping that maybe we could salvage something from this catastrophe . . . but inside the box was a codpiece.

Spiked on the inside and the outside.

Suffice to say, all that dysfunction stuck in a tiny little space wasn’t great for anyone’s health. It didn’t help that we discovered a bona fide witch (RPS editor Sue, again) had married into the family. REalising she was bad news, I tried to take the codpiece away from her. In response, she decided to stab me with it.

Thanks, Sue! Now I can cross “Get Stabbed With Codpiece” off of my bucket list!

I take solace in the fact that after I was unceremoniously ventilated by the codpiece (in actuality, an empty water bottle), everyone wanted to kick the crap out of her. Slight problem with that plan: our Witch-in-Law started making the whips on the walls come to life, shooting lasers out of her eyes, and eventually blew up moments after the rest of us escaped the tomb.

It’s going to be impossible to explain that to the rest of the excavation team.

The final round module had a very simple setup: someone had tried to assassinate the Queen and the King wanted to know who hired the assassin and why. The issue was he picked a group of people who couldn’t stand each other to run the investigation. This included a Colonel from the National Military, the Captain of the King’s Personal Guard, a City Inspector, a Household Servant, the Queen’s Sister, and an Ambassador from a neighboring country that, until three months ago, had been an occupying force in the country we were in.

This module was more intense and serious than the other two. We had a lot of space to use, with separate areas for the would-be assassin’s cell, the infirmary the Queen and our soul witness were occupying, the Queen’s bedchambers, the King’s private meting chamber, and a counsel room where we’d all gather to exchange information. As the story went on, we discovered that our witness wasn’t the Queen’s noble rescuer as we had originally thought. The would-be assassin had actually stumbled upon the witness sexually assaulting the Queen. They got into a knock-down, drag-out fight, during which the witness barely managed to knock the assassin out and get his pants back on before the guards ran in.

By the end of the module the witness was condemned to be hanged and the would-be assassin gave up his employer (or did he?) and was banished from the kingdom under penalty of death if he ever returned.

I played the Ambassador during this module, and one of my favorite moments was when the Colonel recovered the knife used in the attack against the Queen . . . a knife clearly made in my country. The Colonel insisted this meant the assassin was from my country as well. Of course, I denied this left, right, and center.

I was also lying through my teeth.

Not only was the would-be assassin one of my fellow countrymen, he had worked under me before going rogue. When I first saw the prisoner, I knew exactly who he was, but kept it from the others until I could find a way to safely share the information without incriminating my country or myself. I eventually told the King everything . . . about ten minutes before the Colonel started accusing me of being in on the conspiracy. Fortunately, the King decided he could trust me and defended me from the Colonel’s accusations. After all, neither my country nor his could afford another war.

If you’re partial to role-paying over roll-playing and you happen to be at Running GaGG next year, I encourage you to try out the DRT—even if you only play in one module and not the whole tournament. We’re always on the lookout to convert a few more roleplayers into dedicated DRT fans!

Oh, and I promise we won’t eat you if you don’t.