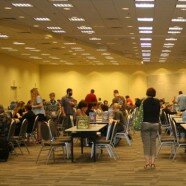 Women at the Gaming Table

Recently 3 of the 5 Princesses went to Con on the Cob, a convention in Akron, OH and my very favorite con. The creator of the con asked people to volunteer to do a panel.  So naturally I took the bull by the horns and volunteered us. ((Next time I’ll ask first I swear.))

So here we have the very first panel by Rogue Princess Squadron.