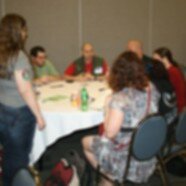 This is the fourth in our series discussing the five geek social fallacies as initially written about by Michael Suileabhain-Wilson on his blog ten years ago. Each day this week, we’re going to hear a different princess’s (author’s) thoughts on this. We’ve already heard from Margaret, Lisa, and Caitlin, while today Alana steps in and shares her thoughts. Specifically, we’re discussing GSF1 – Ostracizers are Evil. For the full description of that particular fallacy, check out the previous post or even go read the original article. 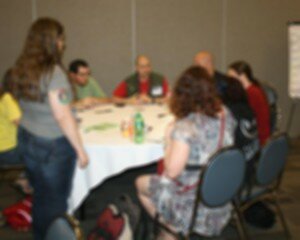 There are no social magic items, but a funny t-shirt can be a good ice breaker.

I am an ostracizer and yes, some people view me as evil. Some have even called me an “elitist gamer” because of the criteria I would like to have in a gaming group. I don’t always have the luxury of being able to pick and choose who I game with. I have no problem meeting new people and trying new games, it’s the main reason I go to conventions. But if you personally bother me I won’t be inviting you to play games with me on a weekly basis.

I would like to say that when it gets to the point when I have to vote you off the island you have done something truly horrible. For example, if you are being a complete bastard to my friends, by personally making fun of them in a mean way, I will tell you why you can never come back to my game. I am also the one in my current gaming group that, if I think someone is hitting people’s buttons, I will pull everyone else aside to say “Hey this is a really annoying habit. Which one of us is best suited to tell this person?” It usually ends up being me. In my Vampire LARP I am the Storyteller, or ST, that people can come to when another player is making them uncomfortable. I take that player aside and let them know “Hey stop being a dick.” or “Hey LARP is not a place to hit on people, you are making person Y uncomfortable, stop it.”

I don’t mind geek funk or nerd smell, in fact to me when I go to cons it has become a home-like smell like laundry or apple pie for others. This however will not stop me from pulling you aside to let you know that you are being rather smelly and should take a shower and put on some deodorant.

Nerds and Geeks are less likely to remove you from the group because fewer friends means fewer people to play games with. We will tolerate other’s faults and flaws for much longer than other social groups so we can continue to have people who will regularly come over to our house weekly to play games. But don’t think just because you are a Nerd that you won’t be removed from the group, because if you annoy enough of the members they will kick you out.

(Come back tomorrow for our last installment in this series, where you get to hear Ang’s ramblings on the subject, or check out our previous installments: Margaret, Lisa, and Caitlin.)