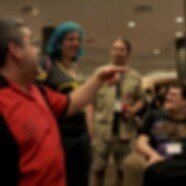 Despite the assumption that geeks or nerds are generally socially awkward, we are very social creatures. There may be a degree of typical ‘nerd’ among us all, but most of what we enjoy and love works best with a group. Sure, there are some pieces of the hobby that can be done solo, with little interaction with others, but that’s the exception rather than the rule.

Combining the myriad mix of what makes us nerds or geeks with the social dynamics of a group can get you some interesting results. In 2003, Michael Suileabhain-Wilson wrote up an article for his blog outlining what he saw as the five geek social fallacies. Ten years later, they are still surprisingly true and something worthy of discussion. It’s a pretty big topic, though, so I thought it would be interesting to take the fallacies one at a time and have each of our princesses (authors) write a little something about it. To keep them in internet friendly, bite-sized pieces, I’m going to upload them one a day throughout the week.

We are, of course, starting with the first fallacy. The full description is quoted below, but I highly recommend checking out Michael Suileabhain-Wilson’s site for the full article.

GSF1 is one of the most common fallacies, and one of the most deeply held. Many geeks have had horrible, humiliating, and formative experiences with ostracism, and the notion of being on the other side of the transaction is repugnant to them.

In its non-pathological form, GSF1 is benign, and even commendable: it *is* long past time we all grew up and stopped with the junior high popularity games. However, in its pathological form, GSF1 prevents its carrier from participating in – or tolerating – the exclusion of anyone from anything, be it a party, a comic book store, or a web forum, and no matter how obnoxious, offensive, or aromatic the prospective excludee may be.

As a result, nearly every geek social group of significant size has at least one member that 80% of the members hate and the remaining 20% merely tolerate. If GSF1 exists in sufficient concentration – and it usually does – it is impossible to expel a person who actively detracts from every social event. GSF1 protocol permits you not to invite someone you don’t like to a given event, but if someone spills the beans and our hypothetical Cat Piss Man invites himself, there is no recourse. You must put up with him, or you will be an Evil Ostracizer and might as well go out for the football team.

This phenomenon has a number of unpleasant consequences. For one thing, it actively hinders the wider acceptance of geek-related activities: I don’t *know* that RPGs and comics would be more popular if there were fewer trolls who smell of cheese hassling the new blood, but I’m sure it couldn’t hurt. For another, when nothing smacking of social selectiveness can be discussed in public, people inevitably begin to organize activities in secret. These conspiracies often lead to more problems down the line, and the end result is as juvenile as anything a seventh-grader ever dreamed of. 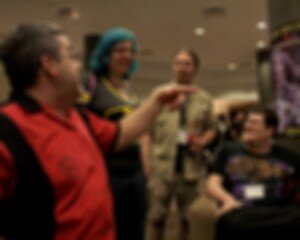 Even if charisma isn’t your dump stat, social stuff can be fuzzy.

Well, here’s the thing. We’re adult human beings. Who, you know, socialize, because human beings do that– we’re social creatures. It’s our nature. However, we don’t get along with absolutely everybody, and that’s normal too. Conflict, or, rather, how we deal with conflict, and effective communication in many ways determine how we grow and deal with our relationships with other people. Conflict and communication shape how we interact with others.

When people hear the word “conflict,” there tends to be a negative assumption regarding conflicts. Make no mistake– it can be. When your social circle is dealing with that one person who tends to be rather repellent for one reason or another and NOBODY says anything and/or tries to avoid them? That’s a conflict, but it’s passive and defensive… with the potential for becoming aggressive. If you bottle something up long enough, it’s only a matter of time before someone blows up in someone else’s face.

Avoidance and accommodating someone else’s bad behavior without “calling them” on it? That can only last so long before things in the group get tense… and that isn’t fair to you, your group, or the “annoying” person in question.

So how can you deal with it?

Approach this person. There is no need to be intimidating or mean about it. Just be frank, and be gentle. You’re not there to be the evil, ostracizing bad guy. You’re there to make relationships stronger. Just walk in there, confident that you’re both going to walk away happier, better people.

What are the good things this person brings to your social circle? They’re a person, and they’re not limited to the negative qualities that your friends find repellent. Let them know about the qualities people appreciate in them, but also be clear that it would be better if they limited (insert repellent behavior here).

It doesn’t have to be a drama. Nobody needs to have their feelings hurt. We can respect each other.

And if they can’t handle it? If they make a scene, throw a tantrum? Well, congrats – now you know for certain how fragile their ego is and how immature they are. And you and your group without this person? …Probably better off.

(Tune in tomorrow as we hear from Lisa…)