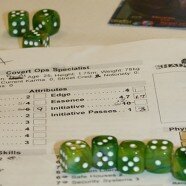 Before I really get into things, I need to make one thing clear. I work in sales (business-to-business lead generation, if that means anything to you). When it comes to my personal life, I may be an introvert who just spent the past three evenings being perfectly content to play Blitzball. (Gotta get Wakka’s ultimate weapon, ya?) But when it comes to work, I love working with people. And when it comes to tabletop games, I love playing the face.

So here, I’m going to take a few lessons that I have learned in the sales world and apply them to gaming. I am going to use the word “target” for the Face’s opponent.

Different sales strategies will call this by different names. Your close, your commitment objective, your goal. Essentially, it boils down to “getting the target to agree to give me something. Time, information, money, shelter, spells… doesn’t matter what. But in any conversation where you are looking to get something, you have to know what you want! I know it sounds basic, but salespeople and faces decide to “wing it” all the time. Sometimes it works and the target lets loose a piece of information that makes you decide what you want to do. Much more often, it leads to meandering conversations that go nowhere, frustration, and getting the target to dislike you for wasting their time. Now, that’s not to say that the objective can’t change during the conversation. An initial objective of, say, getting hired to clear out a basement of dire rats might change when you hear that the town north of you is having a Goblin problem. New objective! Get the target to agree to act as a reference when you… Okay, that might be more sales than gaming, but you know what I mean.

2) Everyone needs something. They just might not know it yet.

Especially in a game world, there will rarely be times where something can’t be “bought,” whether it’s a physical item, a piece of information, or permission to read books in a library, your goal is to find out the price. It may be steep. It may be too high. But it is certainly there. How do you do this? You find out what your target needs. Generally, asking directly is not the way to go; open ended questions that let the other person talking can work wonders. Everyone has something to complain about. Get them to complain to you. What are open-ended-questions? Who, what, when, where, why, and how. They cannot be answered with a yes or no. They let the other person talk and, potentially, reveal more information that you can use.

Make sure everyone is clear on who is doing what and who is getting what. Especially when working with devils, purchasing committees, and any other lawful evil creatures, this is vital. Get it in writing if possible and have your wizard look that over, because boy can that suck if things aren’t in order. To be fair, most of the time, you don’t need to go to that much of an extreme. “So, you will pay us 500 gold to exterminate the leader of the Goblin tribe?” will suffice. (Note: is is a close-ended question, because negotiations are over. If they say no, go back to open-ended questions to find out what they want.)

Just what it says. Don’t promise what you can’t keep to, because cancellation clauses can be a bitch. If you can overdeliver (“We killed the goblin leader and also found this chest of town heirlooms,” for instance) do so. Don’t expect extra reward. Reputation and gratitude go a long way. When people realize that you operate this way, they are likely to want to work with you further, and this opens up new opportunities. Bragging about what you’ve done is a lot better than bragging about what you’re going to do.

Note: On the trope of the Charismatic Asshole

We have all seen it. The smarmy person. The person who thinks that having an 18 Charisma lets them get away with being an asshole. We see these characters in movies and TV shows, where we can tolerate them, even root for them, because we only have to deal with them in small doses. There is a significant point of diminishing returns in being an asshole. Don’t believe me? Go read “The No Assholes Rule” by Robert I. Sutton, which breaks down the long-term costs of employing assholes, even if they produce great results individually. First off, people want to work with people who they like, and are generally willing to pay significantly more for the privilege. Furthermore, the damage that an asshole can do to team morale almost always outweighs any benefit the asshole brings to the team. Does this mean that, by playing the face, you have to always be everyone’s BFF? Nope. But much like you can fool some of the people all of the time, and all of the people some of the time, you can do the same thing with being a jerk. Fundamentally, in an RPG, your character should change, learn, and grow as they level. Or at least put enough points into Bluff that everyone doesn’t know that you hate them.