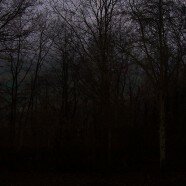 The time of the seasonal, holiday horror game is upon us and I have a confession: I think Cthulhu is stupid.

I can hear the gasps from here. Apologies to anyone who loves the Cthulhu mythos and similar types of horror, because I know there are many of you out there just from the small sampling among my friends. It’s just not for me. My feelings about this spill over towards movies as well. I can appreciate some of the classics, like ‘Psycho’ (the original) and ‘Alien’ (the sci-fi makes it so much more for me), and I’m a huge fan of serial killer thrillers (‘Silence of the Lambs’, ‘Se7en’), but I have absolutely zero interest in the majority of horror films.

Unfortunately for me, Cthulhu and the modern horror tropes tend to be the default whenever it’s time to break out scary games for Halloween. What turns me off is the hopelessness inherent in those types of stories. In Cthulhu stories and in modern horror movies, the assumption is that pretty much everyone is going to die or, if they’re lucky, be left in a gibbering heap in an asylum. While I can logically understand that the hopeless horror story is a valid and important storytelling choice, it’s something I emotionally recoil from. Whether you’re talking about the unspeakable horror from beyond destroying the universe or the unstoppable, implacable, inhuman slasher monster slowly picking off characters one by one, it’s a story I have no interest in playing out with an RPG character.

But it’s Halloween and it’s the time of spooks and scares and it can be incredibly fun to evoke the spirit of the holiday in our games. What do you do when your group wants to play a horror game and you have no interest in traipsing down the typical path offered by Cthulhuoid Horror? It’s actually not too hard, because there are plenty of other stories we can tell with horror themes that don’t necessarily descend into hopelessness. For me and those like me, here are some alternative games to consider:

The king of the terrifying one-shot is Dread. The core mechanic of the game is elegant in its simplicity yet heightens the suspense to epic levels. For anyone who doesn’t know, Dread uses a Jenga tower to determine success or failure in crucially important actions. In most cases, if you knock the tower over while making a pull, your character is dead. Right there, that creates a visceral intensity that’s missing in other horror games. In addition to the tower, the game also uses a unique and intimate way to generate characters. Instead of getting a list of stats and maybe a background, players are presented with a list of questions that form the basis of who their character is. Together, they create a unique and somewhat addictive experience. It’s not uncommon to look into a room where Dread is being played and see most of the players intently staring at the tower or the GM as they sit very carefully several feet away from the table.

Dread can be perfect for the types of horror games I don’t enjoy, but it also works well with many other stories where tension and terror go hand-in-hand. Sure, it can be easy to emulate the monster picking off characters one by one using Dread, but I’ve always enjoyed it best when it delves into the psyches and motivations of the characters involved. In those games, death, dismemberment, and insanity are not the only potential fates in a character’s future. Ultimately it allows you to tailor the scenario to the players at your table. 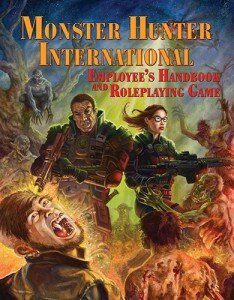 The books are a fun read, and I’d definitely jump into a game with the right GM.

I highly recommend the scenarios offered in Dread: Tales of Terror: Wastelands. Written by Windmill Games, the two scenarios offer good options for a game suited to the season without going the expected route.

Now, let’s say you don’t mind battling unspeakable horrors from beyond, but you’d rather do it with some high powered weaponry. Larry Correia’s Monster Hunter International series has been described as ‘gun porn’, but even with the loving attention paid to the weaponry the characters use, the core of the story follows an intrepid and eclectic group of survivors battling myths and monsters as part of a well-established mercenary outfit. The stakes are high, but the characters retain their sense of humor along with a determination to get the job done. Despite the similarity to Cthulhuoid monsters from beyond, you have little of the desperate hopelessness that has always left a bad taste in my mouth. Honestly, when I read the first book, I thought it felt like something right out of a roleplaying game. Turns out, the author is a gamer, so it all made perfect sense.

Last fall, Hero Games ran a successful Kickstarter to create The Monster Hunter International Employee’s Handbook and RPG, the first official roleplaying game based on the book series. I attempted to play this at GenCon this year but wasn’t able to get into a session. I know the Hero System isn’t for everyone, but the setting gives a very fun, high octane game where the PCs get to take on all sorts of horrific, unspeakable monsters with the shiniest of high powered weaponry.

The Victorian Age is always fun to mess around in.

As a note, I have played a convention game using this setting, but it used Savage Worlds as the game system. It was still lots of fun, blowing up monsters, thumbing our noses at the government’s men-in-black, and trying to save a few lives.

Speaking of Savage Worlds, one of the settings Pinnacle has published is perfect for a Halloween themed game. Rippers puts the PCs in a dark Victorian setting of secret societies and nefarious monsters. It’s the PC’s job to defeat the monsters and still get home in time for tea. If you’re looking for a game that feels like the classic horror of Dracula by Bram Stoker, or The Strange Case of Dr. Jekyll and Mr. Hyde by Robert Louis Stevenson, this is the game for you.

The game uses Savage Worlds, so it’s incredibly easy to pick-up and run. There is a mechanic to represent sanity loss, much like a Cthulu game, but it has never been used in any of the Rippers games I’ve played. What’s always drawn me in is the distinct flavor of the setting and the fun of getting into the mindset of a Victorian character. 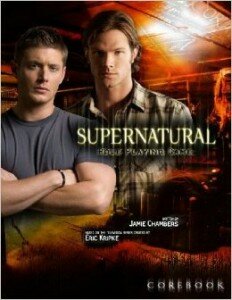 If you’re a fan of the show, the book is really sweetly put together.

So, I don’t like horror, but I absolutely love ‘Supernatural’. I will happily follow the Winchester boys through fighting ghosts, demons, and whatever else has crawled out of mythology to terrorize normal people in their nice suburban houses. Jamie Chambers, through Margaret Weis Productions, wrote the RPG for Supernatural in 2009. The game uses the original Cortex system (not Cortex Plus, which was used in the more recent Marvel Heroic Roleplaying game), but with tweaked rules to work with the setting specific to the Winchester boys.

What wins me over, moving past the horror tropes, is that the show, and subsequently the game, puts more emphasis on the story of the characters and the larger goal of continuing the good fight against things that go bump in the night. It’s still scary, but Sam, Dean, and the PCs are the heroes of the story rather than just the victims of it. Maybe they don’t come through the horrors they face completely unscathed, but they come through and keep going.

Beyond that, the show and the game put a great deal of emphasis on exploring the myth of America. The small towns and back roads the game uses as a setting are as much a character in the story as the protagonists. That sense of Route 66-Americana can flavor the game in a way that creates a unique experience. I believe it’s one of the reasons why the show has survived and thrived as well as it has.

Ultimately, there are plenty of options out there to play a horror game with a slightly different flavor. There’s a place for Cthulhu style games, and I have enjoyed a game or two of Arkham Horror, but it’s also important to know there are alternatives out there.

What kind of horror games do you prefer?