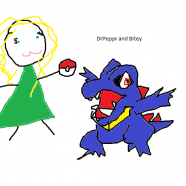 Ah, the Nuzlocke Challenge. Don’t know about it? You can read it here: http://www.nuzlocke.com/challenge.php

For the tl;dr crowd, there are two rules: ONE! Catch the first Pokemon you meet in any new area… and only that one (if you miss it, too effin’ bad). TWO! If a Pokemon faints, you need to release it as if it had died in battle.

It doesn’t sound too bad… and then you actually do it.

The Nuzlocke Challenge offers benefits… and heartaches. The benefit is that it teaches the player to become invested in Pokemon they probably wouldn’t ordinarily give a flip about otherwise (I’m looking at YOUUUUU, Bellsprout!) and not just invested… you CARE about them. You are responsible for them because you don’t want them to die. Suddenly, in the video game world that offered its players unlimited do-overs and continues, there is this realization of mortality smacking the player on the nose.

And because your Pokemon can “die” during the Challenge, you grieve for them.

Plus, that Pokemon that just “died?” There is a gaping hole in your party (and in your heart) as a result. To fill it, you have to hope you can get another Pokemon and then level-grind so it can survive.

But in my opinion, the TRULY AWESOME thing about the Nuzlocke Challenge is that it inspires players to CREATE AND SHARE NARRATIVES based off their own playthroughs. People draw COMICS and SHARE them (some are better than others, of course). That’s pretty amazing. Creativity and community, for the win!

There is one fan challenge comic that really stuck with me– Freddy’s Gold Nuzlocke Adventure. Most of the comics were, you know, just comics, but the guy threw in some flash animations too. The flash animation dedicated to “Nibbles: Level 3-43” is probably one of the most emotional Pokemon Nuzlocke Challenge things I have ever encountered. The finale flash animation against Lance of the Elite Four was also cool. There is something rather satisfying about seeing a Dragonite go down fighting, of all things, a Jumpluff.

It is also pretty creative actually giving the Pokemon different personalities– something that is not part of the game aside from “natures.”

So I tried to do the Nuzlocke Challenge myself and see how I reacted to it, and I started my game in Pokemon: Silver. My name? DrPeppr. I named my rival Uterus because he bleeds right on schedule after every Pokemon battle. Picked the Totodile and named him Mr. Bitey. There was a creepy dude in the grass that beckoned to me and wanted to teach me how to “catch Pokemon,” and I got the heck outta dodge. Amused myself beating up Joey’s Rattata, and then I taught Mikey a lesson because clearly he wasn’t paying much attention when I wrecked Joey. Eventually, I had a Hoothoot named Hootie, a Bellsprout named Twiggy (which I grew to LOVE), and a Rattata named Omnomnom.

Wish I could play more, but my Gameboy and Silver have mysteriously vanished!

Instead, here’s a crappy MS Paint picture.  No mouse. Just the touchpad, baby. 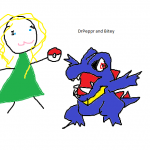 Actually put some effort into that Totodile, sort of.

UPDATE 7/23/13: FOUND MY GIANT 1989 GAMEBOY WITH SILVER ARE YOU READY EVERYBODY DANCE NOW

UPDATE 7/29/13: Poor Silver, you had a good long life. You have no idea what you did to my heart when you told me the save file was corrupted… and then again when you stopped remembering my saves entirely. I know I can always play you on an emulator, but… it is just not the same. I need to feel you in my hands and carry you in the purse of my soul throughout my day. It’s the same with books versus Kindle. Sure, books take up space, but it’s all about the weight of it in my hands, the sound of the page turning, the smell of old, well-loved paper with notes scribbled in the margins. Nothing can ever replace you and what we had together.