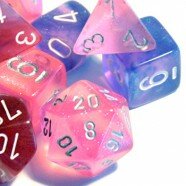 Time for a little bit of administrative updatedness. (Yes, I know that’s not really a word.)

First, we’re sad to share the news that Lisa, one of our founding princesses, is retiring as a regular author. For a variety of reasons that includes the awesome of an impending wedding and a brand new house (well, new to her, it’s actually a rather cool old house), she made the decision to step down from the blog. We’re grateful for the articles she has shared with us, and we’ll leave the door open for her to return when life calms down. At the very least, we want her to do an article documenting the evolution of the perfect gaming room in her fantastic new home.

Second, in much happier news, we’re pleased to announce the addition of Elle to our squadron of authors! Her first article will be going up fairly soon after this post, so you may even read that before you read this. She has been gaming for nearly a decade and a half and beyond RPGs and LARPs, she loves trashy fantasy books, playing the guitar, making character art for RPGs, and spending far too much time on the internet. In addition to that, she’s another from the circle of gamers that orbit in the vicinity of SUNY Geneseo’s wonderful gaming convention, Running GAGG, just like all the other princess authors here.

Finally, we’re open to hearing from you on what topics you’d like us to cover. While we can’t guarantee your suggested topic will be something we can get to, we’re always open to new ideas for articles. Just drop us a line in the ‘Contact Us’ form you can find linked above. We’ve all been having a fantastic doing this so far, and we hope it’s been fun for everyone else too.