This is the second in our series discussing the five geek social fallacies as initially written about by Michael Suileabhain-Wilson on his blog ten years ago. Each day this week, we’re going to hear a different princess’s (author’s) thoughts on this. Yesterday, we heard from Margaret, but today we hear from Lisa. Specifically, we’re discussing GSF1 – Ostracizers are Evil. For the full description of that particular fallacy, check out the previous post or even go read the original article. 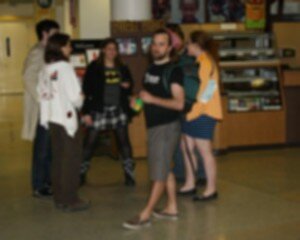 You’ve got to spend XP on social skills. They’re learned, not instinct.

There are many things I could say about Geek Social Fallacy #1. The part about invitations and people showing up? That grinds my gears. I am a stickler for invitations and have missed several events specifically because I was not invited, and then the host later asked why I didn’t come. Social stuff can be frustrating.

That is not the anecdote that I am going to share, though. No, I am going to talk a bit about the 80/20 bit, where if 80% of people try to politely ignore something, the chance of it going away is pretty low.

A few years ago, I was arranging a gaming get-together. It wasn’t actually even at my place, but I am pretty decent at organizing things, sending out invitations, and making sure that everyone knows what’s going on, so was taking care of that. And since I am prone to fretting over invitations, that part made me a little anxious. I went through my Facebook friend list carefully, wanting to invite people who all got along, who I was pretty sure could come, and would not be too many people for the space we were in.

And then I got to this one dude who I will call Bob. I didn’t know him very well. From what I did know, he and I did not get along. He had said some mean things in the past, but I was willing to give him the benefit of the doubt. I knew he would be available, and that there was another member of the group coming to the event who he could carpool with. What was the worst that could happen?

Oh boy. Oh, boy, was there a lot that could happen. At the event, Bob proceeded to get incredibly offended when his wants and whims were not catered to. He also offended nearly everyone with comments that were sexist, antagonistic, and downright cruel. Sometimes a combination of all three. He seemed happiest when making people upset.

It was after the main event was over and Bob had left that someone turned to me and said “Lisa. Why the hell did you invite Bob?” The best answer I had was “I thought you guys were friends so I figured I would invite him.” Everyone shook their heads. Everyone had been wondering what was going through my head when I had included him. Since I had only seen Bob interact with my friends at large public events, where everyone had been acting nice, I assumed that everyone got along.

It could have been prevented. Communication with other, trusted friends who would have been attending the event could have possibly stopped it ahead of time. On the plus side, the whole group is now more open and honest about communication when it comes to these sorts of issues, since we have seen the negative effect it can have to assume AND the positive effect when we all get together and decide to stop inviting Bob.

(For Margert’s part, click here, or tune in tomorrow to read Caitlin’s part.)