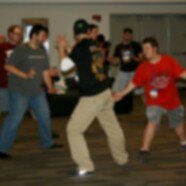 This is the third in our series discussing the five geek social fallacies as initially written about by Michael Suileabhain-Wilson on his blog ten years ago. Each day this week, we’re going to hear a different princess’s (author’s) thoughts on this. Tuesday we heard from Margaret and yesterday from Lisa, but today you get to hear Caitlin’s point of view. Specifically, we’re discussing GSF1 – Ostracizers are Evil. For the full description of that particular fallacy, check out the previous post or even go read the original article. 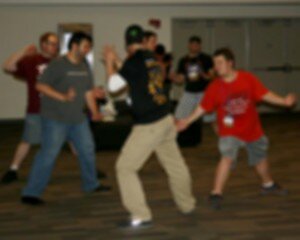 Roll save vs. personal space invasion!

You are not welcome here.

That’s right, I’m ostracizing the rule that says “Ostracizers are Evil.” Why? Because you kill games and gaming groups.

Yeah, High School sucked. Teenagers were assholes. Teenagers are always going to BE assholes. It’s the law of the goddamn jungle. We geeks, with our odd tee-shirts and encyclopedic knowledge of Star Trek/Wars; comic books; Dungeons & Dragons; and a whole host of other nerdy things, are what you might kindly call “sitting ducks.” Our natural reaction, once we’re away from the judgmental jerks that made our lives hell, is to embrace everyone in a pow-wow of love and geeky kindness.

This needs to stop.

That’s not to say I don’t want people to be friendly. If we stop trying to get to know new people we’re going to live sad, pathetic lives. Meeting new people is wonderful, and in a way, GSF1, you encourage us to look past our first impressions, finding the diamond under the rough. However, where I draw the line is the idea that once I’ve met a person I need to always invite them to games/hang out with them/keep them around.

Look, there are people who are awkward and just need a few friends to kick-start their social skills. I’m all for them. Then there are others. You know who I’m talking about. They’re the people you DREAD having at the table. The rules-lawyers. The attention hogs. The people who argue with the GM. The folks who find something to complain about every single session. The guys whose gazes drift constantly southward when talking to girls. The girls who manipulate those poor schlubs to get more power in the game. The people who refuse to actually learn the rules to the game you’re playing. Those types. You may try and address these issues, but they don’t listen.

And that’s where you become a problem, GSF1.

If a single person is killing a game, making it less fun for everyone else, and won’t work with you when you try to address the problem,  it’s time for them to go. But you don’t ALLOW groups to let those people go, GSF1! You encourage—nay! force —groups to keep those people on, until the others in the group are giving the GM lame reasons about why they can’t show on game night when they don’t really HAVE a reason, they’re just frustrated with the situation. Then the game dies the slow, agonizing death of a thousand excuses. Eventually, when someone gets bored and tries to organize a new game, you make someone in the group say “Oh, we should invite so-and-so,” and, despite the fact that everyone’s internal reaction is “FOR THE LOVE OF ALL THAT IS HOLY, NO! SO-AND-SO KILLED THE LAST GAME!” they agree. Thus, the cycle begins anew.

That’s why you need to go.

No, don’t protest, GSF1. We both know that even though old habits CAN be broken, some people will never change. If a group realizes they’re always having the same problem with the same person no matter how many times they’ve tried to fix things, it’s time for that person to be shown the door. You can try gaming with them again down the line, but after a while you’ve got to learn that the definition of insanity is doing the same thing over and over again and expecting different results. You may have to write that person off as a loss, or at least tell them they aren’t welcome until they sort themselves out.

I know you only have the best of intentions, GSF1. But we both know where that road goes.

(If you missed them, check out Margaret and Lisa’s parts, and come back tomorrow to hear what Alana has to say about the subject.)